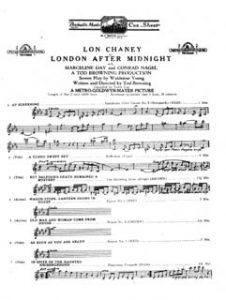 Today, film music composers speak about cues whenever they refer to their pieces of music, written for a specific film sequence. Cues are pieces of music composed for the film. They can have a length between a few seconds, or reach symphonic proportions. It can also be considered, that today’s film music consists of many individual cues, which can later be found on a CDas tracks, or a playlist as individual pieces of the album, labeled “Original Score” or “Original Soundtrack”.

Back then, at the time of silent movies, musicians played live during a movie screening, which inevitably led to a cuing-problem,due to the different music played by each pianist or the Kapellmeister [conductor/bandmaster]. Since there was no standardized system of musical accompaniment to the individual film shown, every musician played what he or she thought was right. Not only once did it happen, that the musicians did not see the film before the actual screening. So, they rather played at random whatever came to mind or whatever sheet music was currently available. That fact caused extremely different reactions in the viewing audience, varying from movie theater to movie theater. Even in the same city the audience criticized or cheered the film, depending on how the orchestra or the pianist accompanied the film musically. In order to mitigate this somewhat, a series of scorebook collections was created, the so-called fakebooks. The fakebooks were intended to serve as guidance for the most common emotional atmospheres, which back then were called moods, so the musician could quickly find and play the moodwanted. The scorebooks contained a list sorted according to the moods required, such as fear, joy, love, happiness, etc., and several well-known music pieces were available for each of these moods. For example, for ‘Fear and Horror’ there was “The Abduction of the Bride” from Peer Gynt’s Suite No. 2 Op. 55 by Edvard Grieg. For ‘Impatience’ stood “Songs without Words” Nr. 1, op. 102 by Mendelsssohn, and for ‘Love-Themes’ one could choose between Dvorak’s “The Old Mother” or Brahms “Valse”.

It is interesting to note that the fakebooks were based on the theory of affects, which flourished in the baroque era. The Latin term affectus means condition, constitution, feeling. The affect theory assumes that music not only represents certain emotions, but can also evoke them. Johann Mathesson (1681 – 1764), a German composer and musicologist from the Baroque period, summarizes around 20 emotions, and explains in his works the musical and compositional imitation of these affects. For joyful emotions, e.g., major keys should be used, or consonances, and perfect intervals should be played. In order to musically depict grief, minor keys or minor intervals and dissonances should be played, to name just a few examples. The use of such fakebooks, which were based on the theory of affects, and relatively imprecisely suggested the music for certain emotional states, soon turned out to be problematic for silent films. Each cinema Kapellmeister or every pianist had several pieces to choose from for a certain emotion. Accordingly, he could only play a very subjective compilation of the music from the fakebooks.

Sometime later, Max Winkler (1888 – 1965), an employee of the New York music publisher “Carl Fisher Music”, had the idea, that if he could see the film before it was released, he would compile a list, containing the exact sequence of specific music. These music lists, the cue sheets – contained a regulated order of music pieces, the cues – for the respective film, with precise time instructions, when the piece should begin and how long it should be played. For example, at the opening – the introductory sequence in the film, Tchaikovsky’s “Arabian Dance” is played, and it should be played until the next intertitle appears in the film – then the next track is played, and so on. The cue sheets thus contained clues about the film sequence, with time information for the beginning and the change, and with the exact indication of which title will be played – when and for how long. Some cue sheets even contained notes for each cue with at least 8 to 16 measures from the proposed piece of music. In case the piano player or bandmaster forgot, these notes served as a reminder.

The talkies (films with sound) brought a new dimension of audibility with it. From 1929 onwards, musicians disappeared from the movie theaters, however, terms such as cue sheet or fakebook continued to exist. The term fakebook is used today in jazz, for example, to refer to the sheet music book containing jazz standards, in which mostly only the musical theme, the melody and the chords are noted. From an artisanal form of musical accompaniment, cue sheets evolved into the real art – that of film music.