Doubling as a method in film music 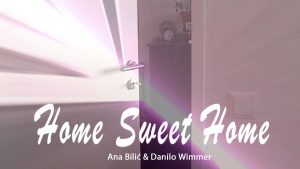 When we see someone crying in a movie, and sad music is played, or when someone laughs and the music that we hear is lively and bright – then we know, it is a musical doubling: What we see on the screen, is anew musically “explained”. Musical doubling in the medium film has a long tradition. It originated long before the sound in film was invented because even during the silent movie era, the musician – ­ usually a pianist ­– tried to “trace” the events on the screen acoustically. After the invention of the sound film, Walt Disney‘s cartoons perfected this kind of acoustic description, in which almost every movement of the character was accompanied by a sound: We remember Mickey Mouse climbing up and down the ladder, and synchronized with his movement, all the sounds of a scale were heard. That is why today, this extreme form of doubling is also called ‘Mickey-Mousing’. For the sake of simplicity, I use the term “doubling” here, as an abbreviation for musical doubling, which in musicology is known by the term underscoring (after J. Kloppenburg) or descriptive technique (after C. Bullerjahn). This simple method is often used on television, in entertainment shows, but mostly for viewers such as children, who need an additional acoustic description to the picture. So, if composers create more sophisticated film music, the use of this technique should be rather restrictive.

In 2010, Ana Bilić and I created the short film “Home Sweet Home“, in which doubling plays an unusual, yet essential part. The film is about an ordinary morning ritual of getting up, shown from the perspective of a person which the film’s viewer does not see. The film works without protagonists, without dialogues, and without sound effects.Visually, the film was reduced to still images. The music, however, takes the leading role – that of the narrator. The music literally “guides” us through the film, and through musical doubling, we learn the important information about what the protagonist thinks, what he feels when he gets up, and what he dreams of. Through the doubling, which merges with a leitmotif in the film’s music, we recognize the change between dream and reality.

Much later, after completing our short film, Ana Bilić and I discovered a short film – very well known and popular for cineasts – based on similar principles: La Jetée (German title: “Am Rande des Rollfelds“) by Chris Marker from 1962. To tell the story, this fascinating short film used similar methods as applied in Home Sweet Home – also using still images, music, and sound effects. The film is about a man in post-apocalyptic Paris – set after World War III – who lives in theunderground, together with other survivors. He undergoes an experiment to travel through time – past and future – so that the unbearable present can be influenced. On his travels, the man constantly remembers a childhood scene at the airport and a woman, whom he later actually meets during his time travels and who also plays a decisive role at the end of the film. Since the story contains a complex, post-apocalyptic science fiction story, the images are accompanied by a narrative voice. The special thing about this “photo novel”, apart from Chris Marker‘s great photos, is – in any case – the music composed by Trevor Duncan, which welds the film together in such a way, that one gets the feeling, these time travels are experienced by oneself. Among other things, he used musical doubling as a technique, and in a sound similar to my method in the film Home Sweet Home. This led me to draw a parallel between La Jetée and Home Sweet Home because they use the same musical technique, and the same storytelling method: namely using still images. I noticed that the films have something in common: the topic. It is interesting to mention the similarity between La Jetée and Home Sweet Home – Both tell a story that switches between worlds or realities. With La Jetée, it is the switch between present, past, and future, with Home Sweet Home the switch between dream and reality. Both films use doubling in music as a stylistic element to illustrate these changes. So, the music, taking a dominant position here – through the doubling, that finds its application outside the “classical” approaches, exploringnew worlds, incomprehensible terra incognita (both in La Jetée as well as in Home Sweet Home) has its own clear and very strong validity.

I was amazed at the discovery, and curious at the same time, wanting to know, which artists were inspired by La Jetée,then a very famous and highly praised film, which is only 29 minutes long. The finding was very interesting:

• David Bowie uses visual references to the film in his video clip for the song Jump They Say;

• the music for the film The Last Tango in Paris by Bernardo Bertolucci contains the leitmotif theme, which Gato Barbieri adapted and expanded from La Jetée.

In this context, we asked ourselves, why La Jetée inspired these films and not others? What do all these works have in common? The conclusion was equally interesting: They all switch between worlds, between a known and an unknown world – present and past (Twelve Monkeys), trust and paranoia (Jump They Say), sensuality and violence (The Last Tango in Paris). Apparently, it is always about a terra incognita that is being explored. A short film like La Jetée, with its experimental character in terms of musical doubling and still images, has triggered a large chain of reactions. I am very happy that our film also appears in this series, even if we weren’t aware of it.