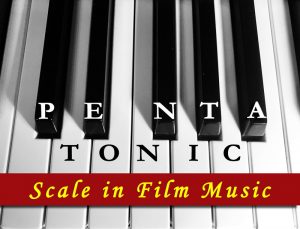 Why not use pentatonic in film music as well?

As an excellent and very successful example regarding pentatonic in film music, I took a piece written by Ryuichi Sakamoto in 1983 for the Japanese film “Merry Christmas Mr. Lawrence” by director Nagis Oshima. The movie is a cult film by itself with a great cast like David Bowie, Ryuichi Sakamoto himself, the famous Takeshi Kitano, etc. The film’s theme song becomes a catchy tune as soon as you hear it. Listen to an excerpt of the melody here:

But why has a film about World War II in Japan become a cult – partly because of its film music? Why is this theme tune in its simplicity still so popular after such a long time? Here’s a little analysis: if we take a close look at the first four measures of this famous melody, we will notice that only the first three measures were played in the pentatonic scale and that there is a small breakout in the fourth measure – it changes from the pentatonic scale to the natural minor scale, which is common Western classical music. This “break” from the traditional pentatonic scale embodies exactly this kind of fusion of different worlds and different cultures, reflected in the film: ancient traditions of Japan colliding with Western culture. Or expressed by the film’s plot: a Japanese and an English soldier confess forbidden love for each other. Sakamoto himself mentions this in his interview in the book “Screencraft: Film Music” by M. Russel and J.Young: “I wanted to write music that sometimes sounded oriental to the listener from the West as well as from the East – something in the middle. I wanted to be in between.” For more than 35 years, Sakamoto’s music from the film has been popular and known worldwide – he himself still plays this song at almost all of his solo concerts.

I firmly believe, that every composer can learn from this simple, yet impressive example.