Myths vs. Facts: About the Beginnings of Film Music 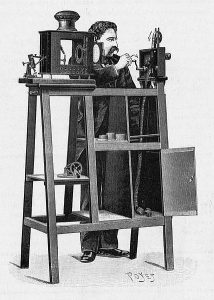 Hansjörg Pauli, the famous Swiss musicologist, clarifies in his book “Film Music: Silent Film“*, the widespread myth about the creation of film music in the era of silent film. The film projector was said to be so loud, that it was essential to play music to suppress the noise of the projector. The first cinematographic projectors, made around the period from 1892 to 1896, were the Lumière brothers’ Cinematograph, and Thomas A. Edison’s Vitascope. The Lumière brothers’ Cinematograph ran almost noiseless, as the film strip was transported by means of a hand–crank, and there was no sound to be drowned out. Edison’s Vitascope, on the other hand, was motorised, and therefore so loud, that the projector had to be placed in the cabin of the lighting technician. Even the New York Times reported on the noise of the projector – which could be heard from the cabin, despite all counter-measures taken.

Another reason why music was used in silent films was, to make the audience feel less afraid in a darkened room by means of cheerful music. Pauli agrees with that: The two projectors – both, the Lumiére brothers’ and Edison’s – had relatively weak light, so it was very difficult to see the projected film on the screen. For this reason, the room had to be completely darkened. In order to avoid the uncomfortable feeling of sitting next to partly unknown people in the dark, a more pleasant atmosphere had to be created quickly. This should be at least one of the reasons, why musical accompaniment to the moving pictures was originally needed.

Therefore, the statement concerning the noise in the cinema hall is only valid one-sidedly, as the noise was mainly caused by Edison’s projector. Unfortunately, this indifferent opinion is still reflected in most modern books about the creation of film music. I think, this is a great pity, and I hope to have brought some light into the dark cinema hall with this contribution.